Tracing helps you to understand the flow of requests happening in distributed microservices-based applications or monoliths. We can do performance profiling, root cause analysis, find failures, errors, and exceptions!

Developers are intrigued by the microservices architecture with other ecosystem tools like Docker, Kubernetes, Java frameworks like Quarkus, Micronaut, Spring Boot.

Serverless is a cloud computing concept wherein you just need to provide the code that needs to be run on the server. The developers are not concerned about the infrastructure or maintenance of it. Essentially a piece of code or method, the function gets stored and executed.

However, the code still needs to be run on Servers. It is a misnomer that Serverless applications don't need Servers while, in reality, code still runs on servers. For more details on Serverless, please refer to wikipedia topic page.

Several serverless use cases include running stateless HTTP endpoints, simple tasks like downloading reports, processing data, etc. However, Serverless is not suitable for all use cases.

Many Serverless platforms are managed by cloud platforms; popular ones include AWS Lambda, Google Cloud Functions, and Azure Functions. Some of these vendors call their service FaaS (Function as a service) too.

There are some Open source Serverless projects like Fission, OpenFaaS which lets you run and host the functions.

However, the runtimes mentioned above support only a few programming languages and versions. Developers also can't bring in their own tools ultimately to build and run their application. You can only run what the runtime supports.

This is where managed Container Serverless Platforms help, bringing the best of both worlds. Developers can bring in their tooling and run the application code in a managed fashion. All that you need is to provide a container.

Knative set the ground for this, letting you run the containers on the popular container orchestration platform, Kubernetes.

Cloud Run is a managed container serverless service from Google Cloud Platform based on Knative. It helps you to run any container from any language, any library, and with any binary.

Cloud run scales automatically and also comes to 0 when not used. It has a free tier.

I'm using the MySQL version to build and run the queries.

We'll be using Java Agent to the instrument and collect application traces and performance metrics.

We'll deploy a Spring Boot Application on Google Cloud Run and query the Cloud SQL for MySQL. We'll ship all the application performance metrics and traces to Elastic APM in Elastic Cloud.

Give an "Instance ID," something like attendance-db and click on "generate" to generate a password. This will be used later to connect to the database instance. Choose the region of your choice. I've chosen the Single zone as it is for a demo. It is recommended to have DB in mutliple zones. I went ahead with the default memory, CPU, storage options provided.

Click on the database name you have created and navigate to the "Databases" menu. Create a database. That we could use in the application.

Note the database name, connection name, generated password. We will use it in our application to connect with the database instance.

Note: I used the Google Cloud Shell + Google Cloud Code extension to deploy the containerized app to simplify the deployment process. You can use VS Code and Cloud Extension from your own laptop and connect to Cloud SQL, but you need to configure the account's private key on your local file system, prepended with file:

Cloud Shell helps you to manage your infrastructure and develop applications from any browser. Cloud shell also comes with pre-installed tools like MySQL, kubectl, Docker, Minikube.

Once Cloud shell gets up and running, make sure you set the right GCP project for deploying the code.

Click on "Open Editor" in the Cloud Shell. This editor is an OSS project called Theia-IDE which looks very similar to VS Code 😉 We'll build and deploy the code using Cloud editor. Just like Cloud shell, it comes with all the VSCode extensions.

Clone the repository to the workspace by using the cloud shell or by creating a new terminal. You will get a finished project by cloning the below repo. You just need to add the relevant configuration details.

There are many integrations offered under the Spring Cloud GCP umbrella.

It is recommended to add the below dependency. It will help you manage the version numbers of spring-cloud-gcp dependencies in your project.

Provide the database name, instance-connection-name, password from the previous step in application.properties.

Tip: Instance connection name can be found in GCP Cloud SQL page be in the format

Create an Elastic Cloud Account -> Observability Deployment. You can refer to my guide with screenshots on account creation.

Note: Don’t declare a dependency to the agent in your application.

Copy the APM server URL and Secret token; paste in the elasticapm.properties

Below Dockerfile is already available in the repository cloned.

Cloud Code is a VS Code Extension that helps you to deploy to Google Cloud Platform Services. In this case, we're using it to deploy to Cloud Run.

It will build the container image, push it to the Google Cloud Container Registry, eventually deploying to Google Cloud Run.

Create a service, choose a region you want to deploy the container. 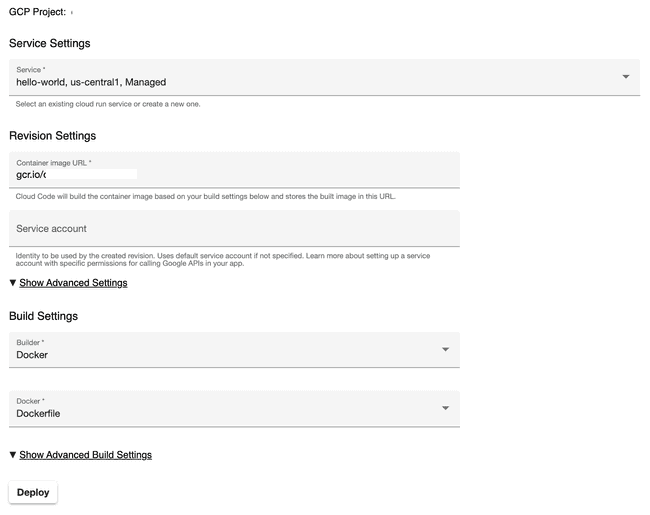 Once the container is built and deployed, you will get an URL. Every Cloud Run service gets a *.run.app domain name for free.

As we configured the application to send traces, head over to Kibana → APM to view everything happening in your application. 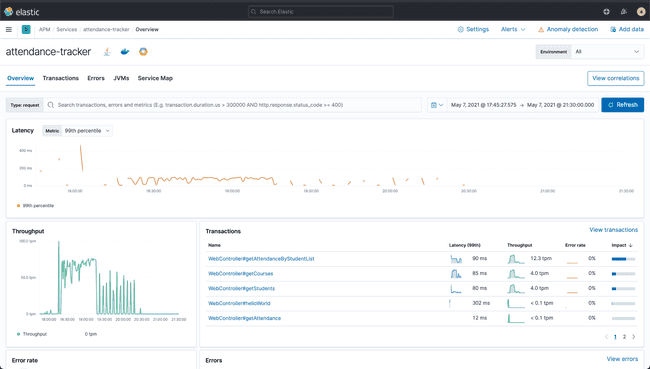 Tracing enables us to collect request spans and which method is responding slow.

Watch how the java heap is occupied by the application as well as the garbage collection cycle!

The application logs are shipped to Google operations (previously Stackdriver). Suppose you can ingest them via filebeat google cloud module. In that case, you could simply correlate the logs, metrics, and traces from the infrastructure.

Execute the below commands to delete the cloud run container deployed and the Cloud SQL instance.

Congratulations, you've successfully built a container serverless app deployed it in the cloud!

In this lab, you have successfully learnt

Check out some of these blogs...